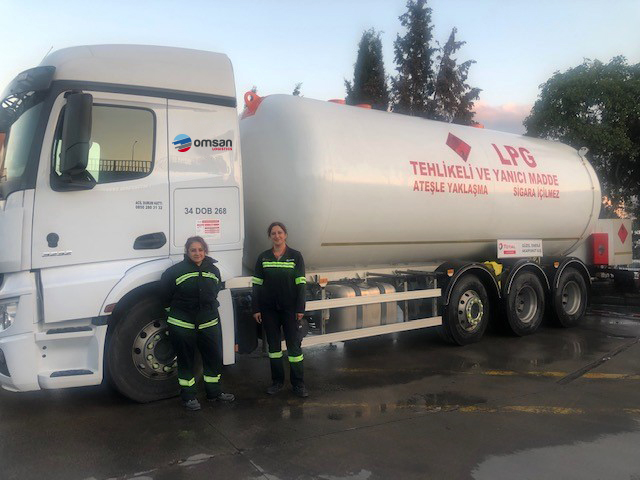 Logistics became one of the most important sectors during the pandemic. In order to lessen the fuel crisis in England which began few months ago, the government sent letters to 1 million people and asked them to drive trucks. During this period, It came to the fore that many drivers in Turkey want to go abroad. On the other hand, inside Turkey, there are important developments related to employment of women in logistics sector. While there is an increase in number of women who drive, especially, heavy vehicles in many domestic and foreign companies, the giants of the sector started to place ads and create new employment area for women in order to train.

One of the companies who aim to increase number of female drivers is Omsan Logistics which shapes the sector with almost half a century history. Omsan, whose companies located in Turkey, France, Romania and Morocco has spread over a wide geography with human resources and who works to be a global player, increased its number of female employees more than 40% in the last 5 years. Now, there are women in the company, who work as drivers in carriage of dangerous goods area. Omsan Logistics Human Resources Director Esin Evran says that in an uncommon fashion, they increased the number of female employees in areas that require rigor such as carriage of dangerous goods, storage and vehicle parking areas and she continues her words as follows:

Creating Opportunities for Women who are Interested in Driving Heavy Vehicles

“Increasing and strengthening female employment, ensuring gender and opportunity equality are important aspects of the values of Omsan Logistics. One of our commitments is that our employees will not be subjected to discriminatory behaviors and that equal opportunity will be provided. ‘Female Power in Logistics’ is an inseparable part of our company values. We increase female employment in carriage of dangerous goods, storage and vehicle parking lot areas and contribute to our operational indications, as well as support the facilitation of gender equality in business world. Alongside our female employees who work as drivers in carriage of dangerous goods area, we also have personnel who work as parking lot drivers and railway operations staff that we employed within the scope of our automotive logistics services. We continue our works to ensure more employment for female employees in areas such as storage, automotive logistics. To give an example; in order to increase female employment particularly in carriage of dangerous goods, we provide all kinds of support to women who are interested in this area but have no license and training, and we also aim to contribute to the development of logistics sector by eliminating the deficiency of application and training in heavy vehicle driving sector. From the point of view that gender equality speeds up economic growth and development in every area, we continue to work with the knowledge that we still have a long way to go for the employment of blue color female employees, and wish that our female employees who are currently working inspire all women.”

Esin Evran, who stated that it is important to increase the number of female employees and that their seniority years should be extended within the scope of the development of gender equality purpose, says that 38 women in total across the company were entitled to receive seniority incentive award last year. Evran says that “Amongst the people who received this award, there are female employees who completed 25 years, 20 years, 15 years. These periods are above the average working periods in the same company in logistics sector. We put emphasis on gender equality in administrative level and key positions, as all levels. With this point of view, we increased our number of female employees in administrative level 64% in the last 3 years.”